I’m not a stranger to being a fool, but I don’t wait around for April to show up before I go looney tunes. It’s a year – round thing, whether I’m trying or not. Even the most sensible of projects seem to end up with a sugar-coating of stupidity, daftness, clumsiness or mistakes (or bloopers. love that word) and however hard I try, the clown in my DNA shows through.

For example, I wore a suit recently and despite everything fitting well, the shirt collars still managed to make my face look like it belonged on my body when I was 6 stone heavier. Sort of like a lollipop.
I was wearing the suit for my Nan’s funeral. After she died, I was asked to write, then read her Eulogy. I managed both, with floods of sad tears, but although touching, respectful and caring, still managed to add a couple of humorous anecdotes.

So if I paint a serious landscape, keep an eye out for a squirrel in a jetpack.

What’s happening this month?
A new banner design. I’ve volunteered some time towards a local community centre, which is evolving and moving in a very fluid way, but towards some serious goals for the community, pulling peoples skills together, however amateur or professional and putting these skills together across the community to improve green spaces and other areas. So far I’ve designed two postcard designs, a poster and two banners, using a series of cartoon houses (which depict the different styles of architecture in the area) and connect these buildings by using the same style ink linework to create ’empty’ outlines to Photoshop ‘on-trend’ emojis into, creating fun and lively characters as representations of ‘local folk’. As the boundaries for the brief are quite fluid, I’ve really had fun developing these emoji characters, as the sky is the limit. I’ve even added a few local faces or team members to the mix. The response has been really positive, amongst the feedback I’ve received is people have recognised the buildings and had fun with added games, like spot the unicorn or spot the squirrel. But none on jetpacks. Yet.

Mosaics:
Been years since I worked with mosaics at college, but that was more a ceramics tiling project than the sort the Pickle family have been embarking on. If any of the pieces we’ve been working on actually work, I’ll post some pics, but either way, it’s fun and the kids love it too.

Other work I’m allowed to mention:
Apart from the jester above, I’ve been doodling some randoms, as I do, one of which is below, in reference to a Facebook group, called ‘Rate My Plate’ where members can post photos of their culinary delights, for people to comment. I’m sure you can imagine the results. Some hilarious. My quick-n-dirty cartoon below highlights the fact that a lot of dinners look like they are waste matter.

More soon everyone, thanks again for stopping by! 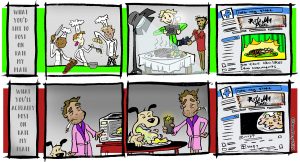